The site is one of the city’s most admired locations as Brgy. Pulang Lupa Uno is situated less than a kilometer from the Cavite side of Manila Bay and just meters away from the newly-built MCX (Manila-Cavite Expressway).

The project’s location is one of the most sought-after sites in the city because of its proximity to the city’s various corporate offices, commercial centers, malls, shopping centers, cultural centers, markets, government and private institutions, and other establishments needed for everyday living. The Hermosa is just a few meters away from Carlos P. Garcia Avenue Extension (also known as C5), the A. Zarate General Hospital, one of Las Piñas City’s exclusive hospitals, and the Las Piñas General Hospital & Satellite Trauma Center.

The nearest schools from The Hermosa are the Olivares College, Universal College, and the PATTS College of Aeronautics, which are all within a 1-km radius from the Hermosa. Moreover, the Vista City Global South, a Vista Land mixed-use development, is just 600 meters away from the Hermosa.

Ever since Las Piñas became the 10th city to be included in Metro Manila in 1997, the city experienced massive economic activities while the thriving residential communities continue to prosper up to this day. The vast expanse of the Hermosa (3-hectare) lets you and the family feels the exclusive ambiance of your new home. The city was previously a part of Rizal province. As of this moment, almost half of the land area of Las Piñas is classified as residential while the remaining half is considered commercial, industrial, and institutional in land use. The city was a thriving fishing community several years ago, Las Piñas leaped into one of Metro Manila’s highly-urbanized city where many businesses and industries had flourished during the past 30 years. Despite the quick ascension of the city from a fishing settlement into a premier industrial/residential city, Las Piñas remains calm and peaceful.

To make you familiarize on the city’s geography, Las Piñas city is bounded on the southeast by Muntinlupa City (where the CBD of Alabang district is located); to the northeast by Parañaque City; Bacoor, Cavite to the west and southwest; and by Manila Bay to the northwest. This strategic location of the Hermosa in the center of Las Piñas allows for easy access to key destinations, not only in Metro Manila, but even in other Southern Tagalog provinces (mainly Cavite followed by Laguna, Batangas, and Quezon) as well as the Bicol Region farther south. 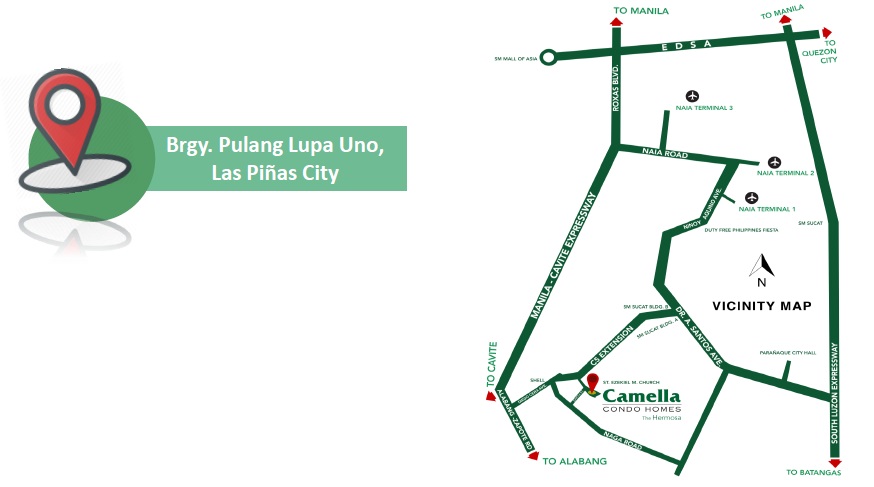